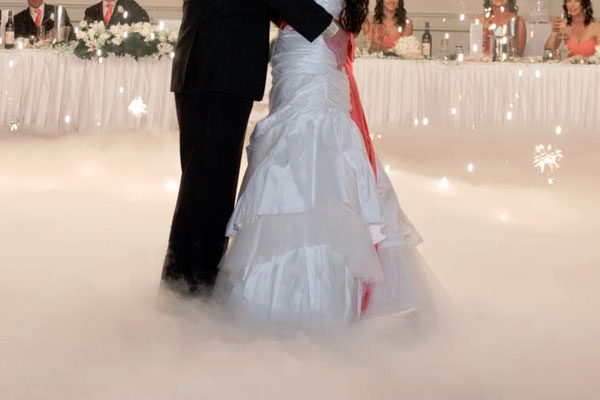 There are two types of smoke used at events like weddings.  Smoke and Low lying fog.

This is the most commonly requested smoke at weddings, because it creates a illusion of dancing on clouds.  It’s a very nice effect, and tends to come out beautifully in photographs and in the video.  This is the case when the smoke stays low to the ground, however it’s not always the case.

The problem with low lying fog

The main problem with low lying fog is that the smoke gets pushed around, and it eventually makes its way up.  The smoke gets all around the couple so instead of dancing on the cloud, they dance inside the cloud.  This does affect the pictures and video of the shot, so it’s a good idea to talk to your vendors to see samples of shots they have with low lying fog.

For low lying fog to really work and stay low to the ground, it cannot be pushed around.  This means you have to watch out for a couple of things.

These machines push out smoke meant to float around in the air.  Beams of light are more visible since they bound off the smoke.  The smoke eventually dissipates and more smoke is generated.

In my experience this smoke can be more of a nuisance than a benefit.  Most people get irritated from the smoke and ask that I turn it off.  I rarely ever take a smoke machine.